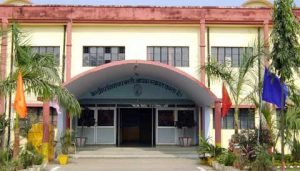 Kendriya Vidyalaya, Basti was established in June 1992 under Kendriya Vidyalaya Sangathan,New Delhi in Civil Sector.Its Ist batch of All India Secondary School(AISS) Examination was sent in 1996. It was upgraded to +2 level in 2002 in the Science stream. The Vidyalaya is established in a big building having two sections from IV to X and one section each class I,II,III,XI and XII near van Vihar on Ganeshpur road, Basti. The Vidyalaya is affiliated with CBSE,New Delhi vide affiliation No.21106. It is connected to the National Highway and 205Km from KVS(LR), Lucknow. It is also connected by Railways and Basti is near Gorakhpur on railway route Lucknow to Gorakhpur

The Kendriya Vidyalayas have a four – fold mission:

KVS envisions itself a world class organization in school education committed to continually empowering teachers to actualize inside out synergy in students and enable them to fulfill futuristic societal, national and global needs and aspirations.

No comments to show.